Menu
Log in
Register
Install the app
You are using an out of date browser. It may not display this or other websites correctly.
You should upgrade or use an alternative browser.

Matchday 4 of the AWC, which will decide the shape of one side of the quarter-final draw.

First up is Peter Odemwingie, whose effort delighted the judges in the group stages: an Ayatollah that does more than justice to his brief 15-match stay at the City, before he was swapped by Ole for Kenwynne Jones, like a human Panini sticker. Odemwingie has however managed to accumulate seven times as many appearances as his opponent, Isaac Vassell, whose game Ayatollah effort was captured when he capped a rare moment of fitness with a winner against Luton.

As before, voting is live for 48 hours.

Going to have to go with Vassell here, just for the fact he's in blue and celebrating a goal. Both have smashing technique though.
Join Cardiff City Forum on our Facebook Group and Facebook Page and Twitter 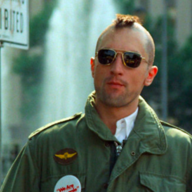 Vassell more energy and enthusiasm
“You talking to me?”

Odemwingie’s form is flawless here, has to be him

Barring injury, Vassell looks like he's got this one in the bag